Raman optical activity (ROA) is a vibrational spectroscopic technique that is reliant on the difference in intensity of Raman scattered right and left circularly polarised light due to molecular chirality. 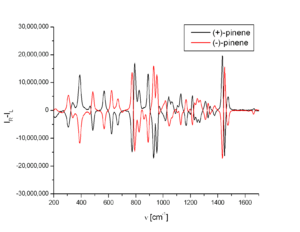 The basic principle of Raman optical activity is that there is interference between light waves scattered by the polarizability and optical activity tensors of a chiral molecule, which leads to a difference between the intensities of the right- and left-handed circularly polarised scattered beams. The spectrum of intensity differences recorded over a range of wavenumbers reveals information about chiral centres in the sample molecule.

Due to its sensitivity to chirality, Raman optical activity is a useful probe of biomolecular structure and behaviour in aqueous solution. It has been used to study protein, nucleic acid, carbohydrate and virus structures. Though the method does not reveal information to the atomic resolution of crystallographic approaches, it is able to examine structure and behaviour in biologically more realistic conditions (compare the dynamic solution structure examined by Raman optical activity to the static crystal structure).

A simple introduction to Raman optical activity instruments can be found on Laurence Barron’s site [1]. Much of the existing work in the field has utilised custom-made instruments, though commercial instruments are now available.

The thinnest chirality assessed by ROA

The symmetry of the neopentane molecule can be broken if some hydrogen atoms are replaced by deuterium atoms. In particular, if each methyl group has a different number of substituted atoms (0, 1, 2, and 3), one obtains a chiral molecule. The chirality in this case arises solely by the mass distribution of its nuclei, while the electron distribution is still essentially achiral. This chirality is the thinnest one synthesized so far and was assessed by ROA in 2007.